According to BEPS Action 11 “Measuring and Monitoring”, the OECD has released a new report that provides data regarding corporate taxation developments from around 100 countries worldwide. Along with the report, the OECD has published a new database, which is now publicly accessible and allows for studies of international trends in corporate taxation. TPA Group’s expert on international taxation, Iris Burgstaller summoned the facts:

1. Corporate tax still an important source of income for governments 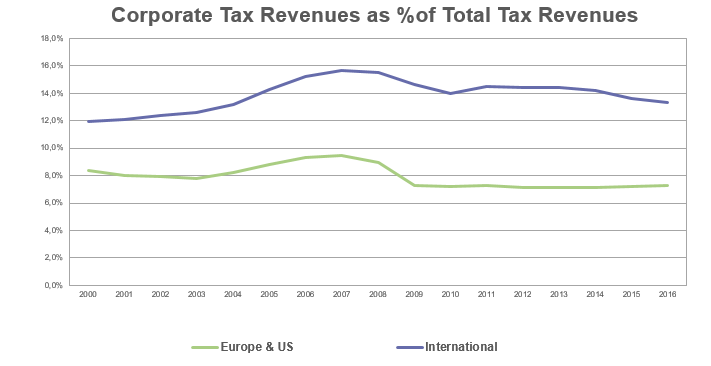 2. Corporate tax revenues worldwide increase, but turn down in Europe and US

3. General trend is that corporate tax rates go down

In general the trend seems to be that corporate tax rates are declining. According to the OECD, national statutory tax rates fell by about 7% on average. While more than 60% of all included jurisdictions had statutory tax rates of at least 30% in 2000, only 20% of all countries had a rate equal or higher to 30% in 2018.

It has to be considered that these data do not refer to the effective corporate tax rate, which, on average, tends to be even lower than the statutory corporate tax rates (about 1.1% according to the OECD report).

The overall trend suggests that corporate tax rates still amount for an important share of a jurisdiction’s income, but are more important in countries outside of Europe and the US. The new database assists in the study of corporate tax policies and will help to improve the measurement and monitoring of base erosion and profit shifting. In future, the OECD will also include aggregated and anonymized statistics of data collected under country-by-country reporting, which will allow for a better assessment of effective tax rates actually paid by companies in the years before.

Are you looking for a German speaking Advisor in Central and South Eastern Europe? Contact our German Desk partners in 12 CEE/SEE countries

Enter your E-Mail and Submit to subscribe to the Newsletter

No Gravityform ID defined
This website uses cookies to enable certain functions and a user-friendly navigation. By using this website, you consent to the processing of data about you like explained in our disclaimer. OKRefuse CookiesMore Information